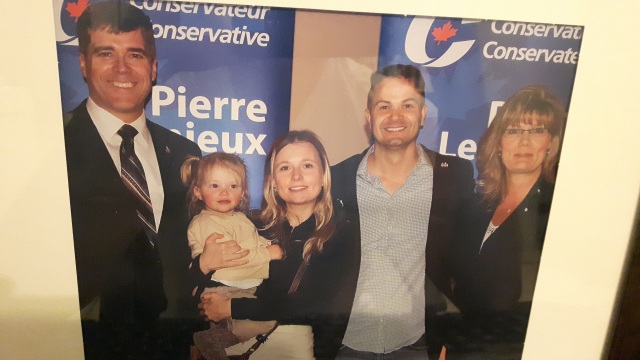 I’ll begin this short story by pre-emptively stating that I’m not supporting or backing any candidate for the Conservative Party of Canada (CPC) Leadership Race. My goal is fostering party unity, and I want to ensure that Pontiac residents have ample opportunity to decide whom they want as the next CPC leader. Under the Trudeau Government, Pontiac residents are facing indefinite deficits, and higher taxes. The Conservative Party of Canada is the only party positioned to bring our finances back into order, and our next leader will be the best bet to challenge the Trudeau Liberals in 2019’s election.

Pierre Lemieux is one of many candidates vying for the leadership of the Conservative Party of Canada. For a number of years he represented the riding of Glengarry-Prescott-Russell (GPR) as its Member of Parliament. I met Pierre in passing over the course of my time spent working on Parliament Hill and saw him frequently in the Government lobby before Question Periods and at functions – usually military in nature. Pierre is one of two CPC leadership candidates with military experience, along with Erin O’Toole.

I was a candidate in the last general election. Pierre’s riding is not that far from the Pontiac, and in pre-writ stages of the campaign I was invited to stop by an event there for a networking and discussion opportunity. It was a well-attended event with live music and good food, with the key-note speaker being then-Minister of Canadian Heritage Shelly Glover.

Over the course of the 2015 election campaign I ran into Pierre a few more times at events with the Prime Minister, and also at media outlets for interviews; it was common to see other candidates at media offices that were interviewing a multitude of regional candidates. Given my status as a Canadian Armed Forces Reservist and Pierre’s military experience, he was easy to relate to.

Of course, the 2015 election came and went, and brought with it a new Government. I didn’t win in Pontiac. Nobody likes losing, and losing in politics makes you feel as if you have let down the people that invested so much into you. I took some time off; we’d been campaigning for a few years by that point and I needed to recharge. I turned off my emails for a bit.

Several weeks after the election Pierre tracked down my phone number and called me up. We commiserated over the campaign and Pierre told me that as he’d been going through a postmortem, he had come across a digital photo of my family and I from the networking event in GPR.

Pierre called because wanted to know what my mailing address was. He had already had the photo printed out so he could send it to me.

The little things matter, and after an election marked by a change in Government the little things can sometimes be put aside as we all adjust. Taking the time to touch base with me personally and provide a nice, hard-copy photo is something that not only meant a lot to me, but said a lot about the character of Pierre Lemieux.

The photo, which is normally hanging on my wall, is pictured above. Many thanks Pierre, and best of luck with your campaign.